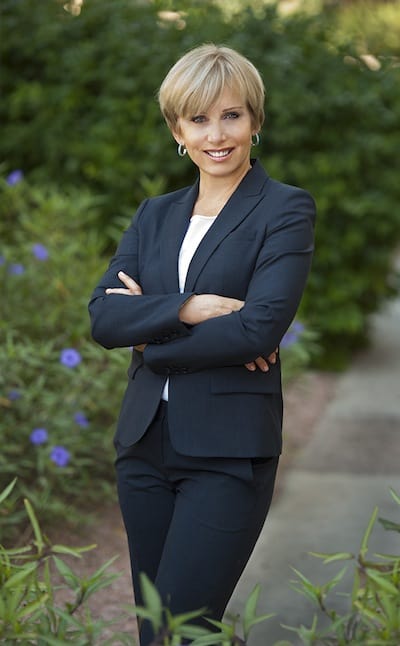 She has also taught at CUNY’s Graduate School of Journalism and William Paterson University. She has led students to Omaha twice for lunch and Q&A with Warren Buffett. She has served as emcee for the UPS Executive Retreat in Palm Beach with Condoleezza Rice as the keynote speaker. She hosted a series of web interviews with the chief investment officer and emceed the National Economics Challenge at Lincoln Center twice. She is a longtime media consultant for the spirits giant Brown-Forman, where she trained the CFO and dozens of other top managers.

Susan was pictured on the cover of Businessweek for a story titled, “What the Market is Telling Us.” She anchored several specials at CNN, including one about the top 25 most influential business executives over the last 25 years. Her favorite story is the first person account she told on the 65th anniversary of D-Day about her uncle Leonard Lisovicz, a lieutenant on Omaha Beach on the day of the invasion. Her uncle, who was awarded the prestigious Silver Star, put on his U.S. Army First Infantry Division uniform and spoke at length about that battle for the first time.

Susan’s work at CNBC included some of the biggest media deals of the time, including the AOL merger with Time Warner. She also anchored for Headline News (now HLN) and traveled all over the country as a general assignment reporter for CNN. She worked for The Associated Press in New York City and Albany, NY. Her many enterprise stories there included a rare byline in the Washington Post for a piece about a small town that nearly doubled in size during a presidents’ weekend sale. She has also written for WABC-TV in New York. Her first professional on-air job, while in college, was as a news anchor at WOBM-FM in Toms River, NJ.

Susan is a former president of the New York Financial Writers Association and has served on its board of governors. She was selected as a RIAS fellow with study in Germany, the Czech Republic and Belgium in the fall of 2010. Earlier that year she traveled to Hong Kong, Singapore and Taiwan as an Asian Pacific Fellow. During that trip she interviewed President Ma Ying-jeou of Taiwan in the presidential palace. She was also a Jefferson Fellow in 2000. That fellowship included study in China, Japan and Vietnam. Susan took unpaid leave to do volunteer work at a hospital in Bangladesh and donated four weeks vacation time to serve as a counselor at Paul Newman’s Hole in the Wall Gang Camp, a free camp for children with life-threatening health issues. She is on the executive board of the Hoboken, NJ Community Center and an active volunteer at Our Lady of Grace Church, also in Hoboken.  She graduated from William Paterson University with study at Trinity and All Saints College in Yorkshire, England. She received the President’s Medal from William Paterson and delivered the commencement address there in 1999.

Susan has taught graduate and undergraduate classes in journalism, business journalism, communications and writing. She has assisted production at the Cronkite School’s award-winning newscast and accompanied students on study abroad to the Middle East and the United Kingdom. She has led MBA students to Omaha for lunch and Q&A with Warren Buffett. She has attended the WISE summit in Doha and has traveled to Asia and Europe on three journalism fellowships.