For a semester, teams of students at Arizona State University poked and prodded the Malheur Enterprise. Recently, we traveled to Phoenix to hear what they concluded. 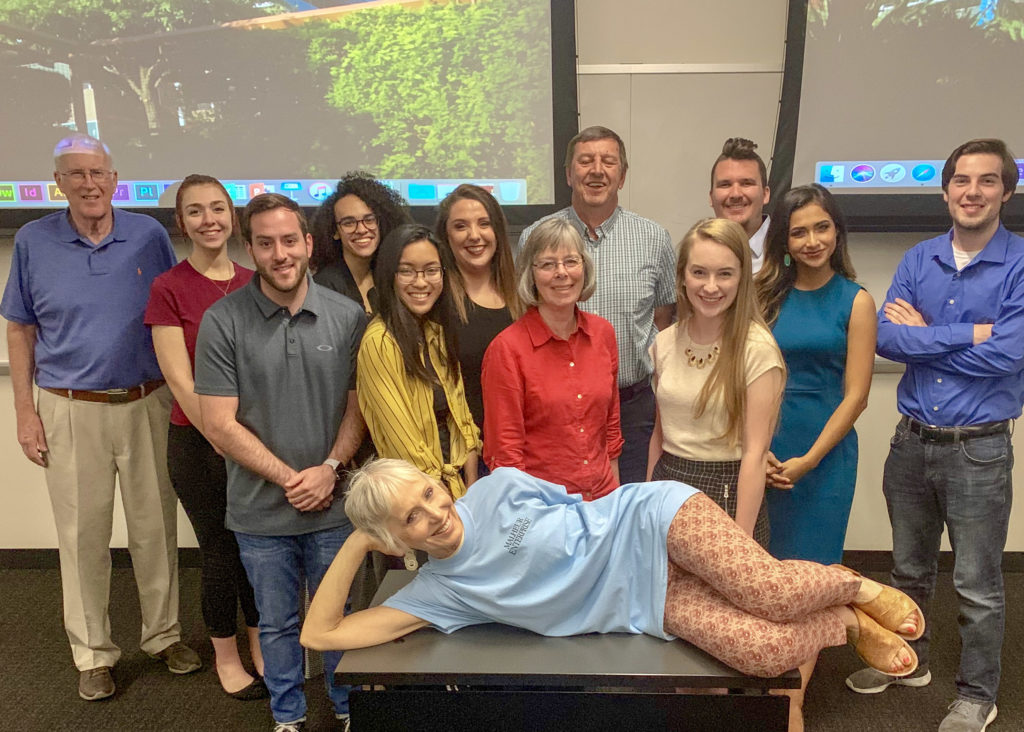 Les Zaitz and Scotta Callister of the Malheur Enterprise with students and professors at Arizona State University in Phoenix.

The call and resulting invitation from Susan Lisovicz in December surprised me.

Lisovicz is a professor at the Cronkite School of Journalism and Mass Communication at Arizona State University. She’s also a national caliber broadcast journalist with deep experience at CNN and other venues.

She wanted to know if I’d be willing to let the Malheur Enterprise serve as a class project for her students. Helped by John Dille, she teaches a course called “Business and Future of Journalism.” Her students would study the Enterprise, consider where we wanted to go as a business, and then propose solutions.

That one of the nation’s top journalism colleges would come knocking on our door was flattering. That the professor and her students wanted to help us get better was intriguing.

Without hesitation, I agreed. After all, Scotta Callister, my wife and former publisher, and I have regarded the Enterprise as a journalism laboratory since we bought it in 2015.

We have a strong belief that communities want quality local news, that people aren’t much for gossip and canned copy, and that doing well in journalism also requires doing well as a business.

So, in January, I jumped into the digital world, meeting with Lisovicz’s class through a video link. I spent more than an hour describing the history of the Enterprise, what I thought its future was, and where we could use some creative help.

Then the students formed three three-person teams. They dug into Malheur County’s demographics and our news content. They put our website up on the digital rack for a thorough examination. They pondered how we could build business by building advertising.

The plan originally was that I’d drop in again by digital link to hear their findings. Instead, Scotta and I opted to travel Phoenix last week. We wanted the students and their professors to know we appreciated their interest and that we wanted to give their work serious consideration.

Scotta and I settled into our seats in the Cronkite classroom and the teams set to work.

They had prepared screen presentations. They had scripted and rehearsed their reports. They were respectful of the Enterprise – and candid about the potential they saw. And they were efficient – moving through their reports in about eight minutes. A lot of adults could take lessons in public presentations from this crew.

And they tended to refer to us as “Malheur” instead of the Enterprise.

“Our vision for Malheur isn’t to change the product of the Enterprise itself but rather to make it ‘of the internet’ instead of just ‘on the internet,’” the team said in its written report.

Another team included Jessica Zorker, May Phan and Cameron Galvin.

“The reporters at Malheur have developed a reputation for localized and trustworthy reporting and have also received national recognition,” the team said. The paper’s website “needs to be updated in a way that better showcases their content.”

“We are looking to help Malheur Enterprise grow their audience, both digital and print,” the team said. “We seek to help this news outlet engage the Latino community.”

We quizzed the students about their recommendations, pressing a bit to see how firmly they felt about some of their ideas. They exhibited confidence in their answers, not the least bit intimidated by publishers grilling them.

One surprise is that these students didn’t turn up their noses at helping “old time” media – newspapers. They seemed to truly appreciate what our news staff does, and wanted to help us find more ways for more people to read that work. They recognized we are a relatively small outfit, and so they didn’t suggest hiring squads of new employees. They worked within the limits of what we work with every week – and they saw strong opportunity.

This was a unique opportunity for the Enterprise, and for the community. The students will get graded for their presentations, but I’d mark them all high if the report cards were in my hands.

Now, they’ve given us our homework and we’ll seriously evaluate their recommendations. We may adopt some, shelve a few, and modify others. In the end, we share a mission with those students in Phoenix – finding ever better ways in today’s era to deliver news you want – while building a successful business that will allow that to continue for years to come.

Les Zaitz is editor and publisher of the Enterprise. Email: les@malheurenterprise.com

Posted in My Blog
← My stomach pain proved to be advanced ovarian cancer, and I didn’t like the odds.Border Wall at Organ Pipe Cactus National Monument →