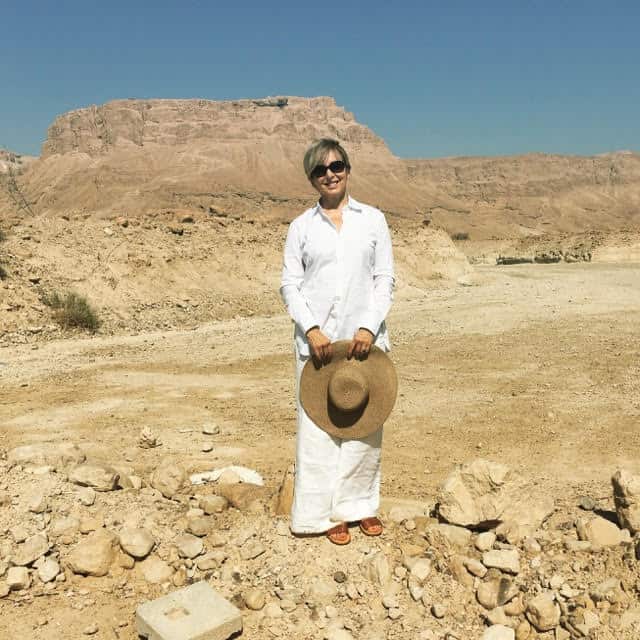 Our Hoboken Girl of the Week is Susan Lisovicz, and if the name rings a bell, it’s probably because you’ve either seen her shopping in one of her fav Washington St. boutiques, blowing off steam on her acoustic at Guitar Bar, or on TV as a reporter and anchor. She bought her place in Hoboken while she was a reporter and anchor at CNN and has worked at a ton of prominent news organizations {CNBC, The Associated Press, Yahoo Finance, Huffington Post and at WOBM-FM in Toms River, NJ, which was her first professional job}. On top of her already impressive resume, she also advises companies on effective communications. From Fortune 500 CEO’s to organic winemakers in Sonoma County, CA, she’s worked with a variety of industries. And when it’s time to relax, she spends every August in northern British Columbia at the log home her partner Lawrence Bijou built on the edge of a vast wilderness. Yes, really. ^ Reporting on CNN outside of the New York Stock Exchange

If your socks are already knocked off by this dynamic and badass Hoboken girl, Susan also teaches during the spring semester at Arizona State University’s Walter Cronkite School of Journalism and Mass Communication, one of the top J-Schools in the country. But her wisdom impacts more than just the students in the classroom — she also takes students on study abroad trips during the summer. This year, she’s packing her bags for Ireland, Northern Ireland and England. Can we go, too?

As if this self-proclaimed student of life doesn’t sound interesting enough, here’s a little more on this our Hoboken Girl of the week: ^ Susan in Israel during a study abroad trip in June 2016

What do you love about Hoboken?

First of all, it’s utterly charming. One square mile with a set designer’s view of midtown Manhattan and blocks full of 19th century brownstones and row houses. But the best thing about Hoboken is the people. It may have a population of about 50,000 but it’s got a very small town feel as you walk along Washington Street. You know the shop owners. You see your neighbors. It’s a totally walking community, which means that people engage with each other. One of my favorite traditions in Hoboken has been sitting out on the stoop on Halloween. Our Bloomfield block has always been overrun with kids. It’s so easy to go door to door for candy when it’s a brownstone block. The neighbors will sit out on their stoops and at a certain point it would become an adult party—complete with adult beverages. Our block would also engage in spontaneous stoop parties. How great is that? It’s a tight community when things are bad, too. Hoboken lost about 50 people on 9/11. I remember the hugs and expressions of relief after that. So many people were missing, never to be seen again. Hoboken really came together. Now I live just up the hill in neighboring Weehawken, but I still spend a lot of time in Hoboken and I do think I will move back there again one day. I never sold my place on Bloomfield! ^ Dining with her mom and boyfriend LB at Dino & Harry’s

What is your favorite restaurant in Hoboken?

I have a few favorite hangouts, like Anthony David and Amanda’s. But if I have to limit it to one it would be Dino & Harry’s. This is where I met my boyfriend LB. We go there frequently. The staff has been there forever, which in itself is a sign of a good restaurant. Dino himself practically sleeps there. It’s a steak joint, although I haven’t eaten red meat since college. There are plenty of other things that are delicious. I happen to love the Hoboken chopped salad—with anchovies. The place just oozes character. It was actually featured in the wedding scene with Marlon Brando and Eva Marie Saint in the film “On the Waterfront.” It’s not a bad thing to have one of the greatest movies of the 20th century filmed in your restaurant. ^ Where she gets her namaste on

Where do you work out?

I take spin classes at Rush Cycling on Grand Street and 15th. This studio has bikes that bend from side to side so you get much more of an abdominal workout. Heidi will kick your butt! I can also frequently be seen on the mat at Power Flow yoga on Hudson and First. The studio is heated so your muscles get warm and it’s much better for maximizing your stretch. Jeff is a yogi icon in Hoboken. And my niece, Jessica Lisovicz, teaches two badass classes at 6 a.m., which is a great start to the day. If you’re looking for a personal trainer, check out Larisa Stahl at NYSC on 14th Street. What are your favorite boutiques in Hoboken?

You can’t miss with Peper & Parlor. Adriana, Rachel and Anne always have your back — and your front, too. They have an unusual selection of shoes. I have a collection of killer Chie Miharas that I’ve gotten there. And I can walk in them! I get my undies and pj’s from Galatea. Gilly, Debbie & Dee are the girl squad there. And Diane and Laura will help you with beautiful things for the home at Luna Rosa Home. Where else do you go in Hoboken?

Sobsey’s on Bloomfield has the best produce in town and Mike and Mac know your palate better than you do. And Guitar Bar on First. Where would we be without music? I’m a bad guitarist but a great music fan. Jim, Tim and Jeff are great music mentors and people. I bring my acoustic or Telecaster and I let off some steam with Jeff on a regular basis.

What do you think needs to come to Hoboken?

This is a community rich in resources. Diverse, talented, dynamic people. But there is no community center to bring us together to talk about issues big and small. I am working with a group of other committed residents to reopen the former Hoboken Y as a center that serves every member of the community. I was part of the board that oversaw the renovation of the rooms that house men who would almost certainly otherwise be homeless. Now Phase 2 is underway. We’d love to have more residents join us on this important project. I also think Hoboken needs an independent movie theater. There are so many deserving films and documentaries that I think would have an enthusiastic audience in Hoboken. And maybe a little bar or café inside the theater? A girl can dream, can’t she?

Posted in My Blog
← Arizona’s largest utility is trying to solve a big problem with solar-powered homesMy stomach pain proved to be advanced ovarian cancer, and I didn’t like the odds. →